Twice to use a hoverboard 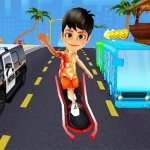 Bus & Subway Runner is remake of popular game with adding new road for run — bus station. So now you are able to play in Subway and Bus Station in the same time. All you need to do is when you have the opportunity to go down the subway do that. Choose from various character, upgrade boosts and enjoy the game. Use Mouse to play. Here you can play Bus & Subway Runner game and watch its walkthrough for free in g60g.com. Bus & Subway Runner is an amazing game from our list of Friv games.