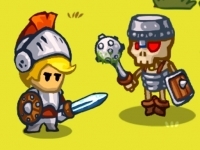 87%
Instructions
How to Play?

Monsters are walking around all over the your castle, kill the endless skeletons with your sword, magic skills, or even super frame. Save your castle, skeletons will destroy castle. Many heroes have already fallen, but you’ve managed to survive. Kill the most of the skeletons and monsters, collectin Age of Quest is an wonderful game from our lengthy game listing in g60g.com. With Age of Quest, we've got a large list of Friv games to have fun playing with.

Use Left Mouse button to Play